After evening the series with Falmouth on Saturday, the Braves knew they would have to fire on all cylinders to have a chance to advance over the West Division’s top team. With so much on the line, that didn’t happen.

The Commodores cruised past Bourne, 8-2, moving them to the division finals.

Falmouth’s first key push came in the third inning, when Trei Cruz hit a three-run, line-drive home run to left field. With one run already on the board, this expanded the Commodores’ lead to four.

That roundtripper was one of five knocks Bourne starter Nick Dombkowski allowed in his three innings of work. After giving up just two earned runs over his last 15.1 innings, this was a steep change in pace.

“He didn’t have it,” manager Harvey Shapiro said. “He put a breaking ball in the middle of the plate, and (Cruz) took advantage of it.”

In relief, Nick Iverson and Sean Harney allowed four combined runs. Three of those came from a no-doubt, three-run home run to left from Steven Moretto.

While the struggles on the mound put Bourne in a deep hole early, the bats didn’t do much to dig them out.

The Braves didn’t appear on the hit column until the seventh inning, due to Franco Aleman’s control on the hill. Bourne scored twice on four hits, which didn’t hold any weight against Falmouth’s eight runs.

“We were too impatient,” Shapiro said.  “We didn’t swing at good pitches.

“We swung at too many breaking balls; we’ve had a tendency to do that.”

After a dismal start to the season, some questioned Bourne’s legitimacy and if it would make the playoffs. Though an early exit certainly wasn’t what the Braves hoped for, winning a playoff game against a team like Falmouth is no slouch.

Even so, Shapiro said he has trouble pinpointing the identity of this season.

“It’s hard to say right now,” Shapiro said. “I thought we got better, but the team that I recruited and the team that got here were two different teams.” 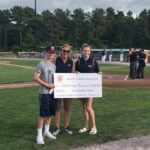