It’s been a strong stretch for the Bourne Braves since they played at Polar Park on July 25 after the All-Star break. Bourne hadn’t lost a game since a 10-3 home loss suffered at the hands of the Falmouth Commodores on July 22 and looked as if they would find a way to get a first-round victory at Guv Fuller Field on Friday after Thursday’s Game One win, as the Commodores had won just five games at home the entire season.

However, the Braves melted down for their worst performance in weeks, allowing a seven-run third and 11 runs total on the night, the most runs allowed by the team the entire season in an 11-4 loss at the Guv on Friday night as the Commodores evened the series at a game apiece.

Lefty starter Hunter Furtado allowed baserunners in each of his first two frames but was able to fight through adversity and hold the game scoreless. However, things took a turn for the worse in the third. Shortstop Alex Mooney got aboard with a leadoff walk and second baseman Colby Halter reached on a fielder’s choice, a poor decision by Bourne second baseman Josh Kuroda-Grauer to flip it to second instead of first, resulting in Mooney being safe at second. Both runners advanced to scoring position on a wild pitch before left fielder Jace Bohrofen broke it open with a two-run double.

Center fielder Andrew Pinckney then bunted and Bourne catcher Alan Espinal failed to collect the ball to throw him out at first. Furtado walked designated hitter Peyton Stovall to load up the bases. Catcher Josiah Cromwick seared a ball to Kuroda-Grauer at second and it ate him up, trickling into the outfield to score two more. First baseman Jacob Walsh doubled to score another two after Furtado recorded the second out and was pulled after the double. Third baseman Anthony Mackenzie hit a single to score Walsh before the frame ended.

“A seven-spot is just unacceptable,” Braves manager Scott Landers said. “We didn’t get the key hits when we needed them, made some poor plays on defense and overall just had a little bit of bad luck. I told them that we have to minimize those innings and we can’t make those mistakes. It’s tough to come back from that.”

The Braves fought back with a three-spot of their own in the fourth as Kuroda-Grauer singled to score first baseman Chris Brito and designated hitter Josh Moylan singled to score left fielder Evan Sleight and Kuroda-Grauer, but their efforts were futile. It was the only true damage Bourne did against Falmouth’s ace, righty Juaron Watts-Brown.

The Commodores would go on to score four more against righty Cameron Bye, who was forced into clean-up duty at the end of the contest. Bye allowed four runs on four hits with two walks and a trio of strikeouts. Landers used only three pitchers on Friday and has the bulk of his arms at his disposal for the winner-take-all game at Doran Park on Saturday.

The Braves have been down and out in both seasons past and in 2022 itself, so this series is very much still up for grabs. All that is on the minds of the current Braves roster is to wipe the mind and flush out any hangover that the second game of the series might’ve had. Moylan, the only returning player from last year’s roster, knows this best.

“We have to be able to take this loss and throw it out the window,” Moyland said. “There is stuff we can work on. We didn’t really execute that well tonight so we just have to flush it and play our game tomorrow as we did out of the All-Star break.”

“Tomorrow we have to wake up with a good attitude knowing you’re going to win,” third baseman Bryce Eblin said. “You have to come to the field with confidence and play your hardest and I think that’s what we will do. We want to win.”

The winner-take-all Game Three commences at 6:00 p.m. at Doran Park. 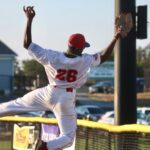 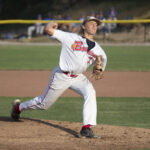