After back-to-back losses to Orleans and Wareham, respectively, it was more of the same on Monday against Yarmouth-Dennis. For the third game in a row, offensive stagnancy in the early innings set the tone for a poor performance at the plate.

Some of this can be attributed to the Red Sox’ stellar defense. They turned three double plays and made several web gems in the field.

“They played very well defensively,” manager Harvey Shapiro said. “They made some really outstanding plays in the infield.”

Jack Leftwich started for the Red Sox on Monday — his second appearance against Bourne. Just like the first time, Leftwich kept the Braves in check, allowing zero runs and just four hits.

Even though Leftwich was lights-out, Shapiro attributes Monday’s drought at the plate to poor hitting, more than excellent pitching.

“We didn’t hit,” Shapiro said. “We haven’t been hitting well. He threw strikes, and when we did hit the ball, they caught it.”

On the flipside, a rough first inning cost Bourne starter Ryan Cusick the decision. He allowed two runs in the first, which ensured his third loss of the season.

Despite earning the loss, Cusick recovered well. He threw six innings and allowed just two hits after the first inning.

“After that, he pitched all right,” Shapiro said. “He struggled in the first inning; he didn’t have his stuff, and they got two runs.”

Though Cusick’s command improved over the course of his outing, it wasn’t enough for the Braves. After Cusick left, Nick Trogrlic-Iverson allowed three earned runs and extended Yarmouth-Dennis’ lead to 5-0.

At that point, the damage was done. The way Bourne’s bats weren’t moving, this 5-0 hole was inescapable.

Monday marked the fourth loss in the last five games. When asked about how to return Bourne to its winning ways, Shapiro declined to comment. 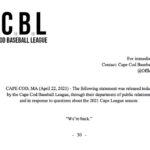