When Andrew Taylor came onto the baseball team at Central Michigan University, COVID-19 cut his freshman campaign short. He had worked his way into a starting role toward the end of that season, and began to work alongside Jordan Patty, who was the sole ace of the staff at the time.

Come this past season, both Taylor and Patty headlined the rotation. The two became even closer, Patty took Taylor under his wing and a strong bond began to form. Little did they know, but that very bond would be essential for the upcoming summer when they made their way nearly 860 miles east.

The pair ended up with the Bourne Braves under field manager Harvey Shapiro and his staff. With it being his first taste of summer ball so far away from home, Taylor said having his college teammate’s company significantly helped with the transition.

“It was huge,” Taylor said. “It was huge coming in just building that comfortability driving out here together (and) bouncing ideas off of each other on the way out here.”

Those ideas included pitch grips and different types of pitches that both Taylor and Patty have been working on.

“We both throw this two-in-one cutter/slider kind of thing, so it was really that, just bouncing pitch grips, trying different things, seeing if things move a certain way, seeing if it tunnels well with your fastball,” Taylor said. “He has/had a curveball that he’s working on too so we talked about that a little bit, but mainly the slider (and) cutter, trying to make those into two pitches, make one harder (and) one softer.”

Clearly those ideas that were being bounced around worked, as both pitchers have been extremely effective during their time in Bourne. Patty has posted a 4.09 ERA through 11 innings of work, while striking out 14. Before his departure from the team on July 13, Taylor had recorded a 1.28 ERA through seven innings. He allowed just three hits, one run, walked three and struck out 11.

In addition to strengthening their relationship on the field, the Chippewas were also making memories under the same roof since they were living with the same host family. Patty said it was great to finally be able to room with Taylor after having different living arrangements out at CMU.

“He’s in the dorms, I’m in an apartment off-campus, so just living with him and being out here together, it’s pretty cool. It’s really fun because he’s a stud, even without the mustache,” Patty said. “He’s really done a good job and it’s been awesome to be out here with him.”

While living together, Patty and Taylor made sure to make the most of their off days when the weather allowed them to.

“Patty’s parents came up and we went into Boston, we went to a Red Sox game, walked around downtown, so that was a lot of fun,” Taylor said. “Another off day our host mom took us up to Plymouth, so we saw Plymouth Rock, saw the Mayflower and stuff and walked around downtown a little bit.”

On days where the weather didn’t cooperate, both pitchers were notorious for playing “MLB The Show 21,” a popular baseball video game.

“I would kick Andrew’s butt in ‘The Show,’ and he would back that up too,” Patty said. “I’m two games away from World Series right now and he’s sitting around the 600s, so I would definitely kick his butt.”

Despite being competitive in the virtual baseball world, the two are constantly there for each other on the real-world diamond.

“After the Notre Dame game, that was probably one of the biggest, he picked me up because I struggled heavily in that game,” Taylor said. “He picked me up even when it was his start day, and he’s a pretty quiet guy on start day. He kind of likes to keep to himself (and) get locked in.”

Taylor said that moment really stood out to him and made him have a realization.

“I had never really been hit like that. I was leaving pitches all over the middle of the plate with every pitch available,” Taylor said. “He really picked me up after that even when he had to start the following day which was huge to me. It made me realize that stuff is bigger than baseball and it’s not all pitching, pitching, pitching, and it’s about building relationships with people too.”

With a couple college seasons under their belts and an experience on the Cape that neither of them will forget, both Taylor and Patty said they haven’t just established a friendship, they’ve established a brotherhood.

“This year we really took a step forward. (I’m) just kind of working with him trying to take him under my wing a little bit because I know he could help us and really make an impact at school,” Patty said. “It was just something like a little brother type thing because (I’m) just trying to guide him along the way, work hard, do the right things and just keep his head straight, and he’s done a really good job of that.”

Taylor, who is still at a relatively early stage in his college career, said that Patty has taught him a lot during the duo’s time together. .

“(I’ve) learned a lot, just to be a competitor because he’s a huge competitor out there. He doesn’t throw that hard, he’s not going to light up the radar gun or anything, but he knows how to locate pitches and he knows how to pitch,” Taylor said. “A lot of people out here just throw, and I feel (like) he’s a really big pitcher. He spots up with every pitch.” 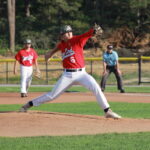 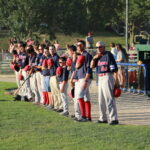