At every level of baseball, the term “all star” is an exclusive award given to only the best players. The Cape Cod Baseball League is no exception.

This year, Bourne will send six representatives — Harrison Rutkowski, Mac Lardner, Karl Johnson, Cody Morissette, Jackson Greer and Jud Fabian — to the 2019 All-Star Game at Eldredge Park in Orleans. This is a jump from 2018, when just four Braves made the team.

For Fabian, it’s remarkable that he has this opportunity. He missed the first eight games of the season because of a late arrival, but has since made the most of his playing time.

“It’s really humbling to come out here and perform the way I have,” Fabian said. “First year up here, it’s pretty fun to make an all-star team.”

A Florida product, Fabian has posted a .267 batting average with a team-high three home runs in 17 games on the Cape.

Along with Fabian in the reserve dugout will be Morissette and Greer. After starting the year 0-for-11, Morissette has been one of the most dependable bats in the West Division, batting .283 with 11 RBIs.

Greer, on the other hand, joined Bourne after stints in Harwich and Yarmouth-Dennis. Since becoming a Brave, Greer has hit one home run and driven in eight runs.

Whether all three of them will enter the game is still unclear. But one thing is certain: this will be an unforgettable moment for the up-and-coming bats.

“It will be fun to meet new guys from different teams, play with some of the guys on our team,” Fabian said. “Just having fun is the key.”

Bourne’s star power isn’t limited to the batter’s box, however. Three of its all stars are pitchers.

One of those, Rutkowski, is in his second year on the Cape. Rutkowski’s 2019 campaign is a steep improvement from 2018, when he went 0-2 with a 6.64 ERA. This year, Rutkowski is one of Bourne’s go-to starting pitchers and has kept his ERA stellar at 1.87.

“Last year, I came in feeling myself out, and this year, I had higher expectations,” Rutkowski said. “Knowing what was going on helped me out a lot.”

Also joining him on the mound will be Johnson and Lardner. Johnson, a bullpen arm, hadn’t allowed a run before Saturday’s loss to Cotuit. And Lardner leads the Cape Cod Baseball League in ERA (0.81) for qualified pitchers.

While the All-Star Game is an opportunity to mingle with other top talent, Rutkowski and his counterparts hope to shine in front of an audience of MLB scouts.

“I definitely hope I throw well,” Rutkowski said. “It definitely feels good to have good stats, and I look forward to playing with the other guys.”

Most recently, the Braves dropped a home contest against Cotuit in a 5-0 defeat. Luckily for Bourne, last-place Hyannis also lost, keeping the Harbor Hawks seven points behind. 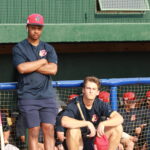 Like father, like son: Adler comes from family of athletes, brings skills from football field onto diamond