We are officially a quarter of the way through the 2022 CCBL regular season and it’s time to hand out some awards to the best Braves performers through the first 11 games. This will be a quarterly series honoring the best hitter, defender, starting pitcher and reliever on the Braves through each set of 11 games across the season.

The Braves currently sit at 5-4-2, good enough for second place in the CCBL West Division behind the 9-1-1 Cotuit Kettleers. They are currently tied for the second-best record in the league with the East Division’s first-place Y-D Red Sox.

While it may not be the start that Braves manager Scott Landers and Co. hoped for with four losses and several statistical misleadings under their belt, the Bravos still hold one of the best offenses in the league, good enough to be second in hits, RBI, stolen bases and batting average behind the Kettleers.

On the pitching and defense side of things, it hasn’t been as smooth of sailing. Bourne sits in last place in walks allowed, strikeouts, and is middle of the road in ERA and WHIP. They also are tied for the league lead in errors with the Falmouth Commodores.

Despite the inconsistencies, the Braves still possess some of the best players in the league through 11 games. With the Bravos set to start Game 12 and begin the next quarter of the season, here are my picks for the standouts of the first quarter. 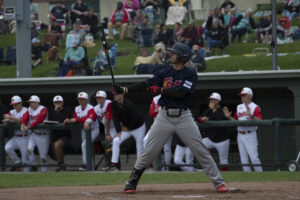 Perhaps the biggest no-brainer on this list, the Polk State product has been exceptional during his time on the Cape thus far. After appearing in all 11 games for the Bravos, Duffy sits atop the CCBL with a .417 batting average and is the only player in the league with a plus-400 average. Duffy is tied for the league lead in hits with UNC-Wilmington’s Brooks Baldwin playing for the Cotuit Kettleers with 15.

However, Duffy’s damage hasn’t been for extra bases, as the Florida native only has two doubles through the first 11 games. He quickly made an impact early in the season against Brewster on Opening Day with his first Cape League hit, scoring two out of the first three Bravos runs of the season with a two-RBI single.

With his low and wide batting stance, Duffy prefers to slot balls through the open gaps with intention, rather than trying to smash the baseball over the infield and beyond.

Duffy’s ability to get on base overall has been stellar, reaching in 10 of Bourne’s 11 games. He sits in third in league OPS at .960 among players with at least 40 plate appearances. 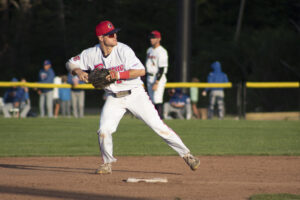 Maryland’s Matt Shaw has only played four games this season for the Bourne Braves after some time off following the Terps exit in their own regional at the hands of the UConn Huskies. Nonetheless, he has certainly made the most of his time in red and blue.

Shaw is third in the league in putouts among second baseman, with his closest competition playing double and nearly triple the number of games he has respectively.

Among a defense that has 15 errors, Shaw is only one of two Braves yet to make a fielding error, the other being Lane Forsythe, who has only played three games for the Braves after missing significant time due to injury.

Shaw is also responsible for some of the Braves’ most thrilling defensive showings thus far, making an immediate impact in his first game against the Orleans Firebirds on the road. On a hit-and-run playup the middle, Firebirds’ first baseman Kevin Sim seared a line drive up the middle, but Shaw stepped into view and leaped into the air, making the catch and tagging the runner for an unassisted double play. 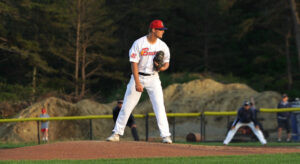 Fischer doesn’t exactly qualify as a full-blown starter, as he’s made just one start on the bump for the Braves, but his outing was by far and away the best by a Bravo thus far. In the second game of last Sunday’s doubleheader, Fischer tossed a hitless five frames with a pair of walks and five strikeouts.

Fischer’s first appearance came in the middle innings against the Brewster Whitecaps, dealing two and two-thirds innings while allowing just a pair of hits, walking three and striking out two.

Against Fischer, hitters possess a batting average of .083, the best among Braves starters and good enough for a top 15 mark in the CCBL.

Fischer has done the most damage with his fastball, using it 70 percent of the time with a whiff rate of 24 percent. The fastball, topping out at 92, has an identical whiff rate to his overall rate across all of his pitches, 24 percent. 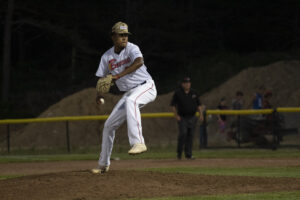 The back end of this Braves bullpen has had its issues, largely contributing to the team’s league lead in walks with 53. However, a significant outlier has been Maryland righty Nigel Belgrave.

Through three outings, Belgrave had just one hit in four innings pitched. The six-foot-four hurler had his best performance against Orleans on June 18, tossing a hitless pair of innings with four strikeouts and looked flat out unhittable as his pitches zipped by the Firebirds hitters with authority.

Belgrave’s fastball sits in the low 90s, but has done considerable damage with his slider sitting in the high 70s. Belgrave has used his slider sparingly, just 16 times – 13 times for strikes and three for balls. With six swing and misses on the slider, Belgrave’s slider has a 38 percent whiff rate, while 68 percent of his pitches overall have been for strikes.

Be sure to come back on July 8 after the game at Cotuit to read the Bravos Best Quarter Two!