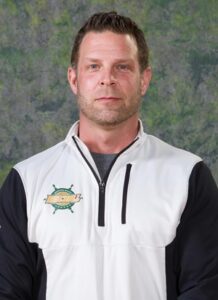 Scott Landers will be the Braves Field Manager for his inaugural season in 2022.

Landers is the Baseball Head Coach / Strength and Conditioning Coordinator at SUNY Oswego since 2011.  He joined the Laker staff after serving as the assistant coach at NCAA Division I Le Moyne College for the prior nine seasons. During his tenure at Le Moyne, five Dolphin pitchers signed professional baseball contracts. Two of Landers’ players were named conference pitchers of the year. Overall, Landers coached 21 players at Le Moyne that went on to play professional baseball.

Landers was the pitching coach for the Brewster Whitecaps.  In 2020, the Whitecaps allowed the second-fewest earned runs (119) in 304 1/3 innings during the regular season, good for an ERA of 3.52. The Caps also gave up the second-fewest hits (258), ranked second-best in walks allowed (114) and had the fifth-highest strikeout total on the Cape (349).

Landers was a four-year pitcher at Cortland. As a player, Landers helped the Red Dragons to three SUNYAC titles, four regional appearances and three NCAA Division III World Series appearances. Cortland finished third on two occasions and seventh once at the NCAA Division III World Series. As a junior, Landers was named to the 1997 ABCA All-America Third Team.

Landers is father to Cal and Maura. 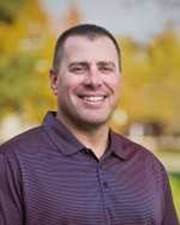 Brad joins the Braves for his first season. Brad Cook was named the head coach of the Hobart College baseball team in November 2021. The Statesmen’s first year of competition will be 2023. He comes to Geneva following three years as the pitching coach at UMass-Lowell.

Cook oversaw the River Hawks pitching staff and assisted in the program’s recruiting efforts. He mentored four All-America East selections, including 2019 first team pick Nick Rand. Cook also developed Josh Becker from a walk-on to an America East All-Rookie Team selection. Cook’s staff was third in the AE in ERA in 2021, walking the fewest batters in a season since 2015.

Before locating to Lowell, Cook spent a decade coaching in the Sunshine State, spending eight years as the pitching coach at NJCAA Division I Polk State College and two more as the pitching coach at NCAA Division II Florida Southern. During his time in Winter Haven, Florida, he helped the Eagles to a 306-123 record with his pitchers leading the nation in ERA three times. He has coached 12 players selected in the Major League Baseball Draft or signed as free agents. Three, Alec Asher (Philadelphia, Baltimore, Milwaukee), Gus Schlosser (Atlanta), and Tommy Romero (Tampa Bay) pitched in the majors.

Cook is a graduate of Marist College with a bachelor’s degree in special education. He played two seasons for the Red Foxes, winning back-to-back MAAC Championships. The right-handed pitcher was named to the 2002 MAAC All-Tournament Team. Cook transferred to Marist after two seasons at Keystone College. He earned All-America honors as a sophomore with the Giants. After graduating from Marist, Cook went on to play for the Elmira Pioneers of the Can-Am League. He also holds a master’s degree in mathematics education from Walden University. 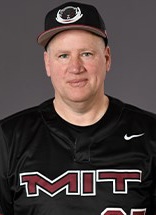 Kevin Curtin is in his first year with the Bourne Braves serving as the assistant pitching coach. He starred at Burlington(Ma) High School and went on to pitch at Harvard University where he amassed a .750 winning percentage over his career and in 1987 had the 4th best ERA in NCAA Division 1. His single season 0.88 ERA still ranks in the top 5 in the Harvard Baseball record books. He was an assistant coach at Burlington for over 20 years and is currently the Head Coach at Nauset Regional High School on Cape Cod. Additionally, Coach Curtin serves as the Assistant Pitching Coach for Massachusetts Institute of Technology (MIT).

Kevin is married to his wife Eileen and they have 5 adult children. 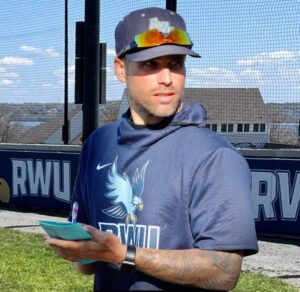 Kevin Kelley joins the Braves for his first season having just completed his second season as Head Coach of the Roger Williams Baseball team.

In his first season at the helm of the RWU Baseball program, he guided the team to its best season since 2008. RWU rolled to its best 20-game start in program history, opening the season 15-5 before grabbing the second seed in the CCC Tournament. The team went 20-11 on the season, achieving the second-best winning percentage in program history (.645). Nine student-athletes were named to the All-CCC Team including senior Brandon Jenkins being named CCC Scholar-Athlete of the Year. In addition, three players earned All-New England Region honors. Over the course of the season, several individual school records were broken including grad student Joey Gulino setting the new single-season stolen bases record (31), single-season walks record (36), and career walks record (89). Grad student Danny Roth set the new program record with 23 career home runs, while Jenkins set the single-season program record with 45 runs batted in.

Kelley came to Roger Williams after having spent the past two seasons as the Head Baseball Coach at Rutgers University-Newark. While at Rutgers-Newark, Kelley was responsible all aspects of the baseball program including, game planning, scouting, skill development, fundraising, and fitness training. In his first season, he helped lead the team to the New Jersey Athletic Association Semifinals, defeating the top two seeds along the way.

Prior to Rutgers-Newark, Kelley spent nine seasons as the Associate Head Baseball Coach at the University of Massachusetts-Boston. During his time at UMass-Boston, he aided in developing the Beacon into one of the premier programs in New England, culminating in three Little East Championships and two NCAA Division III College World Series appearances. In 2010, he helped lead the team to its best season in program history. Over the course of the year, the team was ranked #1 in the country, won the NCAA Division III New England Regional Championship to advance to the College World Series, and finish the season with a then school-record 38 wins.
Kelley is a 2003 graduate of Suffolk University where he was a four-year member of the Baseball team. While a member of the Rams, he was a team captain in his senior year and helped the team win the 2000 and 2002 GNAC Championship as well as the 2000 ECAC New England Championship. 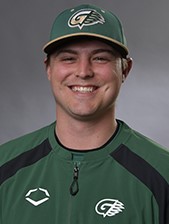 John Topoleski is in his first year with the Bourne Braves. He just completed his second season with the Georgia Gwinnett College baseball program after one year with Carson-Newman University and two-years at Tusculum University. He will work with the Infielders and also be assisting with hitting and base running.

Topoleski helped assist the Grizzlies to its first National Championship, while helping Griffin Keller, Livingston Morris, and Gabe Howell earn All-American accolades at the end of the 2021 season. Howell also won the Gold Glove for the best infield performance at the World Series. 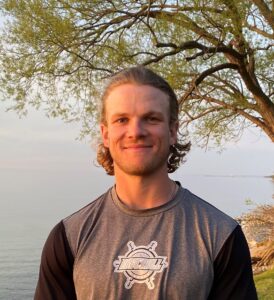 Lukas joins the Bourne Braves for his first season. Lukas is from Bayport, NY and has Spent 6 years at SUNY Oswego playing and coaching baseball, while earning a Wellness Management BS. Has worked as a personal trainer in Syracuse, NY for a year and a half. His time was spent at Oswego as a catcher and is looking to have a career as a baseball and strength and conditioning coach. 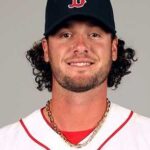 Jarrod joins the Bourne Braves for his first season. Fans will recognize him as a member of the 2013 World Champion Boston Red Sox.

He was drafted in the first round of the MLB draft by Atlanta Braves in 2003 and went onto enjoy a 17 year career in MLB. He is currently head coach at The King’s Academy in West Palm Beach, Florida.

Jarrod is married to his wife Ashley of 17 years, and they have four daughters; Sidney 15, Hunter 14, Sloane 11 and Charlie 7. 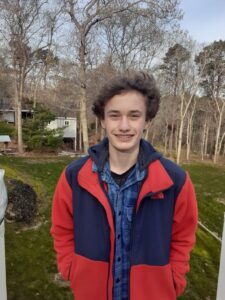 Michael is 14yrs old and attends Sturgis East High School.  His interests are baseball, basketball, jiu-jitsu, and fishing. He and his family are looking forward to hosting another player this year. 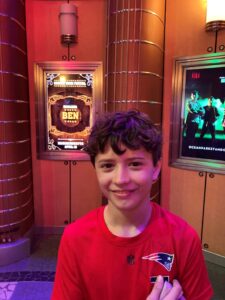 Ben Buckley is a 12 year old that loves baseball, hockey, and basketball.  He lives in Bourne with his sister, 2 brothers and a dog.   He is going into 7th grade in the fall.  He plays baseball for Bourne Youth Baseball and his favorite positions to play are outfield and short stop.   This will be his third season being a bat boy for the Braves! 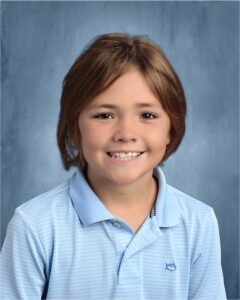 Ryan is a lifelong resident of Bourne, and just completed 6th grade. He has been playing baseball for several years, is also quite busy playing soccer, and skiing. He has enjoyed playing baseball with the Bourne Braves players over the recent years at the summer youth clinics. 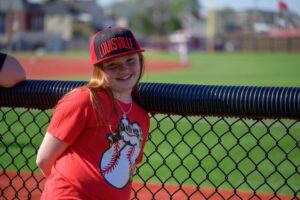 Ainsley 11 Years old and St Josephs Catholic School. While her passion for sports is centered mostly on Hockey she loves watching the Braves and the Louisville Baseball team. Ainsley’s U10 Canal Sharks Hockey team made the state tournament this year and won their conference Championship in a 4 overtime shootout. 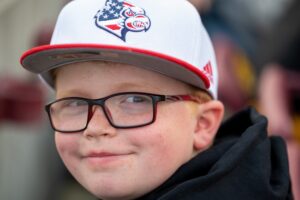 Tyler fell in love with the sport of baseball after attending an award ceremony at Doran Park for his Bourne youth baseball team. He then attended the Braves summer camp and was immediately hooked for life. He met some of the best players on the 2021 roster and became fond of them all. They instilled a love of the game for life in him at the age of 8. His favorite players are Dalton Rushing, Christian Knapczyk, Peter Burns, Eric Adler, Xavier Lovett and Ben Etheridge. Along with all of the other members of the Braves team that made the summer of 2021 memorable for many kids in town. Tyler attends St Joes Catholic School in Fairhaven and this spring has attended 4 Boston College Eagles Games and 6 Louisville Cardinals games. Including a trip to Louisville to see their home field. 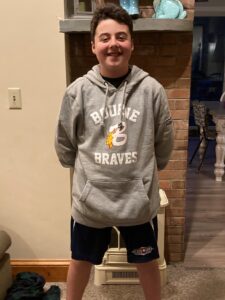 Zach is 14 going to UCT in the fall and looking forward to playing baseball on the same field as the Braves. Zach also is a junior black belt in karate and enjoys playing golf. 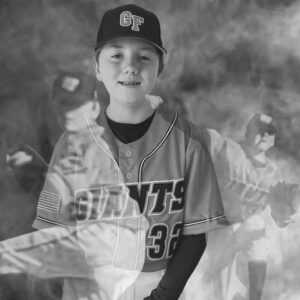 Kobi Polisky is a returning bat boy for his 6th year.  He is currently in middle school at PSMS.  He is a pitcher, second and third baseman for his club team Glenn Tufts Giants Futures and on his town team Nolan’s insurance.  He is also on his middle school tennis team.  Over the summer he will be traveling to Kentucky and ocean city, MD to participate in tournaments. In the winter you can find him at Loon Mountain. 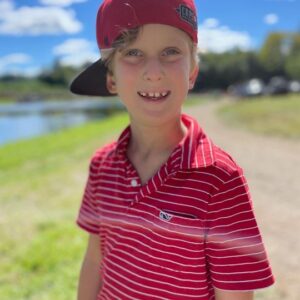 Kellan is a 8 year old Sagamore Beach resident who will be entering 3rd grade this year at the intermediate school. His love of baseball started at 3 and has continued to grow. He plays 1st base on his current town team and is excited for the upcoming Bourne Braves season. You can catch Kellan playing ball or sharpening his hockey skills on any given day. There is not a sport he doesn’t love! 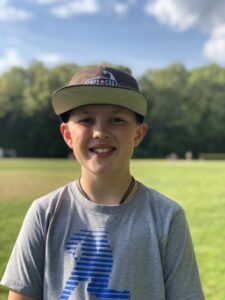 Jackson Yespy is 12 years old and going into sixth grade in Boxford, MA. He spends his summers in Bourne with his family. Jackson’s favorite sport is hockey where he enjoys playing goalie the most. He also loves baseball and likes to play every position especially catcher and pitcher. Jackson has two sisters who like playing sports with him. He enjoys being active on Cape Cod by fishing with his dad, rollerblading along the canal and digging for clams with his grandparents. He is very excited to be a bat boy for a third year for the Bourne Braves.