With one out and a runner on first, Braves All-Star closer Ty Cummings collected himself atop the Stony Brook Field bump. He delievered a 1-2 pitch to Brewster third baseman Nick Lorusso, who speared it back to him. Cummings quickly flipped to shortstop John Peck at second, who fired a dart to first baseman Chris Brito. All three players participated in the first game of the season on July 12, a 5-3 win over the same Brewster Whitecaps.

It had been 13 years, 363 days and 567 games, but that 1-6-3 double play finally broke the excruciating chain of events. The Braves were dispatched by the Whitecaps in both 2017 and 2021 in the Championship Series, but they would not be denied the third time around, as they grabbed a two-game sweep of Brewster with an 8-1 win on Thursday, claiming their second-ever Cape Cod Baseball League Championship in franchise history.

The Braves finally overcome their nemesis in the Whitecaps, winning their first CCBL Championship in 13 years, the second ever title for the organization.

Scott Landers is the first manager to win the title in his first season at the helm in 17 years. pic.twitter.com/gpFmJQPRxF

Saying Bourne third baseman Bryce Eblin had a rough start to his 2022 season would be an understatement. The Alabama infielder didn’t get his first hit in a Braves uniform until his 14th at-bat in the fifth game of the season. He went on to hit at a 6-for-43 clip in his first 17 games, a .140 batting average.

Eblin was mentally weak and lost at the plate. The adjustment to wood bats was something that plagued him, but also the competition level at the beginning of the season proved to stump him, as pitching tends to dominate in the early stages of the CCBL season. Eblin had to go back to the drawing board.

“I think on the Cape, you are going to have a lot of ups and downs,” Eblin said. “You have to stick with the process. I got a lot of help from the other guys and assistant coach (Jarrod Saltalamacchia) who helped me with my hitting, gave me feedback and addressed the mental side of things. I had to embrace the grind.”

Eblin navigated his struggles and fought through them with his newfound knowledge, eventually finding a role as the everyday leadoff batter and table setter for the Bourne offense. In the final 27 games of the season, he had seven multi-hit games.

He saved his best for last. Across the Braves’ seven playoff games, Eblin had 11 hits, four walks, three stolen bases, five runs scored and a single RBI. He was the first run to cross for Bourne in a four-run first inning on Thursday. After a 4-for-5 afternoon in the clinching game against Brewster with two runs scored and a stolen base, Eblin was named the Star of Stars Playoffs MVP.

“I’m very happy to be in this situation,” Eblin said. “But I coudln’t have done it without this team. It starts with our team culture. I’ve been really close with these guys and I’ve been here since day one and it’s been huge for us getting together and having fun, taking the emotion out of baseball. When we do that, when we have fun, we win a lot of baseball games.”

Furtado Fights For His Flight

Bourne lefty starter Hunter Furtado found out he would receive the ball to start the CCBL Championship-clinching game just a few days before the action kicked up at Stony Brook Field. With Game One suffering a massive rainout at Doran Park, pushing the series back a day, as well as serious rain in the forecast for Game Two, players and coaches alike began to get anxious about whether they would find a way to get the games in before they had to head back to school.

Furtado’s father gave him no choice. At 7:45 p.m. the night before the game which Furtado would start, he sent his son his flight itenerary with a text that said, “Win tomorrow, and hop on a flight home on Friday.”

“That fired me up,” Furtado said. “When he sent me that, I knew it was go-time.”

After a poor start in Game Two of the West Division First Round against Falmouth in which he allowed seven runs to cross in the third inning, Furtado had to find a way to turn a corner and get better production against Brewster. He opened the contest ambushing the Brewster front three with a mix of his high-velocity fastball, biting slider and looping curveball. Furtado struck out the red-hot Carson Demartini, who hit four home runs in 24 hours in the East Finals against Y-D. He finished the first with a strikeout of right fielder Cameron Fisher. He would go on to dispatch two more via strikeout in the third before he came under fire from a desperate Brewster offense for one run surrendered in the fourth. It was the only run Bourne gave up all day.

“I felt good in the first couple of innings,” Furtado said. “In the fourth, I just wasn’t hitting my spots as much, I got in a little bit of a rut, but I felt like it was good enough to put us in a position because we got those four runs early.”

There are a lot of special players that make up the 2022 Bourne Braves roster, but there’s one who is particularly special to Braves manager Scott Landers, utility player Ryan Enos. The all-time leader in copious categories at Division-III Oswego State, Landers’ school-year coaching gig, Enos played under the Bourne manager for five years. With his eligibility dwindling at a program he had set the bar for excellence at, Enos is set to transfer to Eastern Tennessee State for his final year of college baseball, but when he got the chance to play for his manager and good friend one more time with the Braves this summer, he couldn’t pass it up.

“To be playing with Scott means a lot to me,” Enos said. “He’s always given me a ton of opportunities – bringing me to Oswego and then here to Bourne. He has always trusted me, had confidence in me and put me in the lineup. I owe it to him.”

Enos certainly made the most of his time, too. In 10 games with the Braves towards the end of the 2022 season, Enos had 11 hits in 33 at-bats with two doubles, a home run and four RBI. He walked three times, stole four bases and only struck out twice. Enos had a three-hit game in the 9-0 drubbing of Cotuit to close out the regular season, with a three-run home run, RBI single and a double in the eighth.

Knowing the value and clutch factor of Enos, Landers inserted “Mr. Oswego” into the starting lineup on Thursday, placing him in left field. Enos delivered one of his best performances of the season, starting with a two-run single in the Braves’ massive four-run spot in the first to score Brito and Sleight. In the sixth, he clobbered a two-run home run that darted off of his bat like a heat-seeking missile, disappearing into the trees beyond the left-field fence at Stony Brook. All Landers could do was sit back and smile.

T6: Ryan Enos hit this ball to the stratosphere. A two-run shot to left. His second home run of the season.

“I’ve watched Ryan Enos do it on the biggest stage his entire career, even since he was a freshman with me,” Landers said. “I knew he could do it when he got here and part of the reason he was in there today was that when the bright lights come on, he shows up. I wish him the best of luck at ETSU. I am going to miss him.”

For the first two rounds of the playoffs, Cape League MVP and Bourne middle infielder Matt Shaw was nowhere to be found. The outstanding Maryland Terrapin’s bat had gone quiet. The barometer for Bourne’s success and a leader with his work ethic, Shaw needed to come alive so the Braves would follow. His triple in Game One was a precursor for what he would go on to do in Game Two.

Shaw hit another triple in the fifth, hoping to extend Bourne’s 4-0 lead, but was stranded on the basepaths. He wasn’t going to let that happen again when he came up in the seventh. Shaw smashed a pitch low in the zone, sending it soaring into the afternoon sky at Stony Brook Field. His teammate in Brito cleared the scoreboard with a mammoth blast when the Braves visited Brewster earlier in the season. Shaw’s home run clanged off the top right corner of the scoreboard instead, a two-run shot that ballooned the Bourne lead to 8-1.

T7: The Braves are flexing their muscles in the seventh, stretching the lead. The Cape League MVP smashed a two-run shot off of the scoreboard in left. Bourne is running away with it.

Day Ones Get It Done

The Braves opened their 2022 season at Doran Park against Brewster on June 12, a 5-3 win for the Bravos. Of the 55 Braves players that were a part of the roster this summer, just 11 went the distance. Four of those 11 played in Thursday’s game – Eblin, Peck, Brito and Cummings.

It was only fitting that Cummings, the elite closer who shut down the first game of the season and then absolutely mowed down the league for the entirety of the season with a 0.52 ERA in 17 innings pitched, was the one who would grab the final outs, earning a well-deserved glove spike and dogpile on the mound.

“What made our team special is its will to win,” Landers said. “You watch their work ethic and they want to be here, they want to get better. They don’t want to go home, they want to win. At that rate, we were good in every facet of the game, nothing led me to believe that they wouldn’t be here in the end.”

Following the Braves’ title win in 2009, Bourne made the playoffs for eight years straight, losing in the semi-finals four times. When they finally made it back to the Championship Series in 2017, they fell to the Brewster Whitecaps. They missed the playoffs the next year and lost in the first round to Falmouth following that. Once again in 2021, they made it to the CCBL Championship Series, where once again they lost to the Brewster Whitecaps.

Talking around the Braves’ camp, it is believed The President’s Trophy, awarded to the team with the best record in the regular season, is cursed. In 2021, the Braves held the same honor, before being swept. When it was delivered to the press box on August 4, Game One against Falmouth, there was a collective groan about its presence. No team had won the Cape League Championship since it was first awarded to the regular season champion in 2012.

In the Doran Park press box, there currently sits three trophies on a table. A shiny silver West Division Championship Bowl sits on the left. The President’s Trophy sits on the right, with a fresh “2022 Bourne Braves” engraved on the right side. In between them, towers the Arnold W. Mycock Trophy, awarded to the Cape Cod Baseball League Champions.

In 2022, Bourne got up and defied every single curse and obstacle in its way, finishing a magical summer atop the best collegiate summer league in the country. 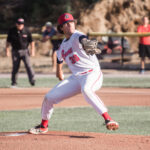