Although there were a number of terms to describe the Bourne Braves’ 2021 season, the word “historic” was frequently used, and it’s easy to see why.

There’s been everything from walk-offs, to six-run ninth innings, to players getting drafted minutes before first pitch. It was hard to ignore the magic that was in the air just over the Bourne Bridge, and that magic just may have stemmed from a series of baseballs covered in a thick, sticky substance that results from the distillation of pinewood.

Many players on this year’s team attribute a lot of the success the Braves had to multiple renditions of the infamous pine tar ball. For the entirety of the summer, multiple baseballs were passed throughout the dugout and bullpen, each of which ended up getting dressed in pine tar and various other substances that both pitchers and fielders decided to use to coat each ball. The team crafted four of these balls throughout the regular season, the first of which was made just three games into the season in Cotuit on June 22.

“Colby Thomas, he was one of the outfielders that was down that day, (he) wasn’t playing. So for fun he decided to grab a baseball and stick as much pine tar as possible on a baseball and we thought it was pretty funny, so we were playing catch with it in the outfield,” Joe Lampe said. “That was when we went on our big, what was it a 10-game winning streak, around there? So we said, ‘Hey, it’s the pine tar ball.'”

In order for the powers of the pine tar ball to work, there was a very specific ritual that had to be done in the first inning and throughout the entirety of the game.

“We play catch with it in the first inning with the outfield. The outfield’s tossing the ball to get warm and then we toss it back to the bullpen and they hold on to it for the game,” Lampe said. “They add a little bit more grass, or dirt — whatever they want to put on it. It ends up circling its way back to the dugout. If a guy’s having a rough day, we have him touch it in between the fifth, sixth (and) seventh inning if they want to touch it (and) get a little magic from it.”

Following the team’s first loss against Cotuit on July 5, Lampe gave the first pine tar ball to a young kid in the crowd because its powers had been exhausted. The Bravos then tied with Orleans the following game, and that’s when it hit Lampe. A new pine tar ball needed to be made.

“We were shut out six innings with (Falmouth) after the Orleans game,” Lampe said. “We’re getting shut out and I’m like, ‘Hey, we need to make a new one because I gave the old one away.’ Obviously because it had a loss in it. Cayden Wallace was the one who was down that game, and he ends up crafting a ball in the top of the seventh, and we ended up putting three or four runs (up) that inning and end up going on to win.”

Although the magical powers of the pine tar balls were now evident, Thomas, who had made the first one, said that those powers could not be abused.

“You can’t abuse it,” Thomas said. “If a guy’s sitting here and he holds it for too long, then it takes all the hits out of it for everybody else. You got to be careful with it.”

The legend of the pine tar ball soon even trickled down to the kids who were attending this summer’s youth clinics. Lampe said nearly everyone was trying to get their hands on Bourne’s lucky charm.

If you weren’t convinced in the ball’s ability just yet, it’s understandable. Maybe everything up to this point was purely a coincidence. But things were about to get a whole lot stranger.

Lampe had taken the second rendition of the ball home with him to his host family’s house prior to the start of a three-game set with Hyannis on July 12. He had given it to his host brother, Colin, after the team’s loss to the Anglers on July 11 to give it a rest. It remained there until July 17, and in the five games that it was out of commission, Lampe went 0-for-14. He then realized he had been leaving it at home, brought it to the game against the Kettleers on July 18, and finally broke through with a hit.

Once again, the ball had come through for the Bravos. Thomas said he had never put so much faith into a good luck charm, but the pine tar ball was simply different.

“We had something last year, I can’t remember what it was, at school. I think it was like a stuffed animal which we used, but we never took it as serious as the pine tar ball,” Thomas said. “The pine tar ball has been the most serious thing I’ve been a part of.”

Bourne went 9-0-2 with the first version of the ball and 10-1-0 with the second edition. The second pine tar ball era also saw the Braves go on their longest win streak of the season, as the team rifled off eight straight from July 12-July 20. But after a 4-2 loss to the Commodores on July 21, ball three would make its way into the spotlight.

The third ball was somewhat short-lived after tragedy struck. The Bravos beat Orleans 4-3 on July 23 in game one of the new era and followed it with another win in Chatham the following night. But on the bus ride to Veterans Park, the ball slipped out of Lampe’s bag and was lost on the team bus. It was never recovered.

As a substitute, a picture of the third ball was printed and framed at a Staples in nearby Falmouth. For a whopping 60 cents, the team had a colorized 8.5-by-11-inch printed copy of the pine tar ball to hang in the dugout. But unfortunately, the powers of the copy didn’t work like the real thing. 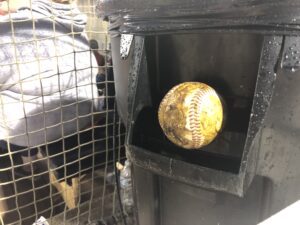 The third pine tar ball. This was also the image that was printed, framed and placed in Bourne’s dugout (Photo via: Nick Galle).

Bourne went on a three-game losing skid, which sent ball number three into retirement. A fourth ball was unveiled to finish off the regular season, and the Bravos ended up clinching the No. 1 seed in the West Division and finished with the best record in the league at 24-9-3.

Perhaps that luck from the regular season carried over to the postseason, as the Braves took down the Ketts in three games to earn their first championship series berth since 2017. Bourne ultimately fell to Brewster in two games, but 2021 still went down in the history books as a season to remember.

Aside from the actual play of the team as a whole, Harvey Shapiro was named Manager of the Year and Eric Adler was named Reliever of the Year. The Bravos were also awarded with the President’s Trophy for having the best regular-season record on the Cape.

Whether the success stemmed from four balls covered in pine tar or not, one thing was for certain — this year’s Bourne team was special. Thomas said that the guys in the dugout were really what made the experience worthwhile.